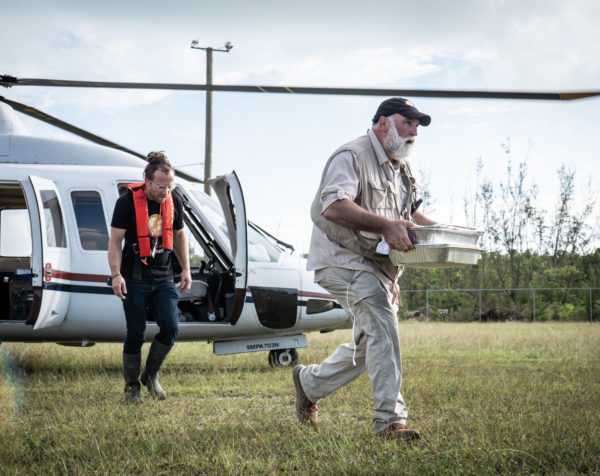 José Andrés – a Spanish-American chef and owner of a chain of restaurants in the United States – established WCK 10 years ago, assembling chefs from around the world and mobilising them to provide a global and cooperative response to a variety of emergency situations.

He has already used his influence to support political and humanitarian causes such as helping to create food resiliency in the face of disasters in Haiti and Puerto Rico, and has spent years promoting immigration reforms and job improvements in the catering sector.  Throughout, he has been aware that the kitchen can be an engine for social change.

During the challenges created by the pandemic, WCK has played an important role. When the spread of coronavirus began to escalate in March, José Andrés took action, both in cities across the US and in Spain.  With the health crisis at its worst in Spain, WCK was running around 150 kitchens in 10 cities with the support of local chefs, food banks and the Red Cross. The organisation showed that during the pandemic it had evolved into a global collaborative initiative between chefs across the world.

As an owner of a large chain of restaurants in the United States, this Asturian chef points out that “only those who work in the restaurant sector can help revive the economy while at the same time rebuild communities.” Founded ten years ago, WCK has intervened in many countries and mobilized thousands of volunteers and cooks from around the world. In addition, the chef has spent years promoting immigration reforms and workplace improvements for the restaurant sector, aware that the kitchen can be an engine of social change.

2020: ONE WINNER AND 10 SPECIAL RECOGNITIONS

Facing the impact of the pandemic, BCWP paid close attention to chefs  carrying out inspiring and meaningful work, in order to share a strong, powerful, multiplying and collective message, by not only announcing one winner but also giving 10 special recognitions, to celebrate the work of 10 inspiring people, that show what happens when chefs use their strength, creativity and talent to connect with their communities in such demanding context, while giving examples of cooperation and responsibility.

From operating solidarity kitchens, to facilitating access to food to people in need as hunger proves to be one of the biggest growing effects of this crisis. From re-establishing supply chains for small producers; to chefs providing direct support to restaurant workers as our industry continues to struggle with the consequences of closed bars and restaurants.